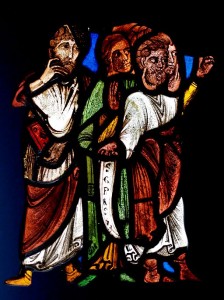 My graduation and a number of church matters busied me away from a series on apostles, and this post will be a final few thoughts on the matter for now. The NT gives requirements for what it is to be an apostle (see here and here), and Paul’s description of himself helps to explain his apostleship as well. It is debated whether or not Barnabas is an apostle, but I sided with the evidence that he is not.

In addition to apostles who are the apostles, there are also those who are termed apostles merely in the sense that they are messengers. Paul sent Epaphroditus as a “messenger” (apostolos) back to the Philippians (Phil 2:25). He did the same with Titus and the unnamed brother who were “messengers of the churches” (2 Cor 8:23). Jesus spoke of messengers in general when stating, “nor is a messenger greater than the one who sent him” (John 13:16).

There are also those who are apostles with Paul in the sense that they are sent for the purpose of gospel ministry. Men such as Timothy and Silvanus could be included in this category (1 Thess 2:6; cf. 1:1).

We should also add that Jesus is uniquely “the apostle” in Hebrews 3:1. He was sent like none other to provide redemption for the children of God (cf. Heb 2:10–16).

Having hardly scratched the surface for this topic, hopefully I’ve laid out the broader principles that establish the multiple senses of the term apostolos as it is used in the NT: 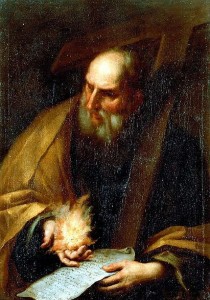 Was Barnabas an apostle? This question is important because it is related to the larger question of whether or not apostles exist today. If the NT gave a pattern of apostles being added to the original Twelve (and Paul), could there be apostles today?

I explained in previous posts that the Twelve and Paul had a unique apostleship that singled them out from others that were called apostles in Scripture. In this post (and more to come), I will examine who else was called an apostle in the NT and the meaning of the term apostle as it applied to these individuals.

Part of the difficulty in explaining Barnabas as an apostle lies in the fact that Paul, too, is called an apostle in Acts 14:4, 14. If Paul was an apostle in much the same way as the original Twelve, to call Barnabas an apostle alongside Paul seems to color Barnabas with the same apostolic hue as Paul. But this reasoning does not necessarily follow.

Luke typically describes Barnabas as an individual who was distinct from the twelve apostles (Acts 4:36; 9:27; 15:2, 22). These verses and others demonstrate that Luke consistently used the term apostle to refer to the Twelve.1 Luke’s use of the term apostle with reference to others such as Barnabas and Paul is exceptional.2 This is not to say that Paul was not an apostle, but it is to say that whether Paul, Barnabas, or anyone else, Luke did not typically call these men apostles. More likely, Luke used a more generic use of the term apostle, albeit with reference to two notable individuals. One scholar refers to Acts 14:4, 14 and explains this use of apostle as follows: “In this broad usage, then, an apostle was a first-century evangelist who bore witness to the resurrection of Christ, an itinerant missionary sent by Him to make disciples of all nations.”3 Barnabas was an apostle in the sense that he was sent to proclaim the gospel with Paul (cf. Acts 13:1–3).4

In short, Luke described Barnabas as someone distinct from the Twelve. He was sent with Paul to proclaim the gospel, and in this sense, he was an apostle. He cannot be used an example of someone who received an apostleship that was the same as the Twelve or Paul and thus be used as precedent for anyone to claim a similar apostleship today. 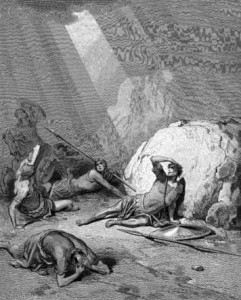 Over the last couple of weeks, I examined Acts 1:21–26 for the requirements laid out by the early church for one be an apostle (part 1, part 2). The three such requirements were as follows:

1. An apostle followed Jesus during His entire earthly ministry from His baptism by John to His ascension into heaven (Acts 1:21–22a).

2. An apostle saw Jesus after His resurrection (Acts 1:22b).

When we look at these requirements, we wonder – how was Paul able to claim that he, too, was an apostle?  He met only the last two of these three requirements. He saw Jesus after the resurrection (Acts 9:1–9; 1 Cor 15:8), and Jesus appointed him to be apostle (Acts 26:16–18; cf. 9:15–16). However, Paul was an unbeliever who persecuted the early church (Acts 8:1–3; 9:1–2) and could obviously not have been one who followed Christ during His earthly ministry (cf. Acts 1:21–22a). Was the first requirement really not all that necessary? Could this apostolic appointment of Paul set a precedent to open the door for others to later say that they, too, had somehow seen Jesus and been appointed to be apostles as well?

The answer is no because Paul describes himself in terms that imply he was an exception to the rule. Twice in 1 Corinthians he describes his apostleship in correlation to when Jesus first appeared to him (1 Cor 9:1; 15:8–9). In the second of these descriptions, he notes that Jesus appeared to him “as to one untimely born” (1 Cor 15:8), a phrase that describes one of the primary ways in which Paul’s apostleship was distinct from the Twelve. Apart from other ways this phrase could be taken, it seems Paul used the picture of a premature birth to imply that his apostleship was something that came about rather abruptly as opposed to something that had been developed over a longer period of time.1 Teasing out the picture further, one could say that the Twelve underwent the full development of apostolic nurture in being discipled by Christ during His earthly ministry.2 In contrast, Paul’s apostleship came about rather suddenly and apart from such a process.

Putting this all together, the Twelve were the Twelve in part because they  were with Christ from His baptism by John to His ascension into heaven (Acts 1:21–22a). Christ chose Paul to be an apostle apart from such a process, but even Paul knew this type of apostleship was out of the ordinary (1 Cor 15:8). Moreover, if Paul’s apostleship was unexpected for such a reason, it seems all the more unlikely that we would see apostles today. 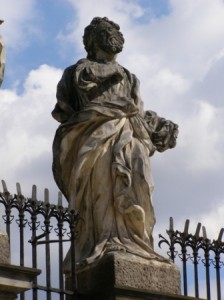 We saw last week from Acts 1:21–26 that the early church laid out three requirements in choosing a replacement apostle* for Judas Iscariot:

1. The candidate was required to be someone who followed Jesus during his entire earthly ministry, beginning from Jesus’ baptism by John to Jesus’ ascension into heaven (1:21–22a).

2. The candidate was required to have seen Jesus after His resurrection (1:22b).

What I did not stress in the previous article was this: if these are some of the requirements to be an apostle, then no one is an apostle today. These requirements are historical conditions that no one can fulfill today. No one today can claim to have followed Jesus during His earthly ministry. Along with this, neither can anyone today claim to have seen Jesus after His resurrection. And, if someone has seen Jesus neither before nor after His resurrection, neither will he be able to claim that Jesus was physically present to personally appoint him to be an apostle.

But perhaps someone claims Jesus gave him a personal appointment to some type of apostolic ministry through a dream or vision.  If this is so, could a person still be an apostle? I am an unashamed cessationist who would dismiss such a claim outright, but even if someone could claim such a dream or vision, he still could not be an apostle. He did not follow Jesus during his earthly ministry from Jesus’ baptism by John to the point of His ascension into heaven.

Adding one more thought—if one cannot be apostle, neither can he enjoy what Scripture calls apostleship. In the context of Acts 1:21–26, apostleship is a ministry that is enjoyed by only those who are apostles. The eleven prayed to the Lord Jesus and asked Him to reveal which of two men would “take the place in this ministry and apostleship [apostolē] from which Judas turned aside” (Acts 1:25). Paul used this word elsewhere with the same sense (Rom 1:5; 1 Cor 9:2; Gal 2:8).

Pulling all of the above together, Acts 1:21–26 denies the possibility of apostles today and their correlative ministry of apostleship. An apostle is someone who followed Christ during His earthly ministry, saw Him after the resurrection, and was personally appointed to the apostolate.

*Scripture uses the term apostle in a more general sense as well (cf. 2 Cor 8:23). I hope to address both  this use in the days ahead as well as the unique appointment of Paul.

“What is an apostle?” This is an important question to answer because many people in Christendom claim that there are apostles for today or at least claim that some enjoy what is called the spiritual gift of apostleship. Over the course of my next couple posts or so, I hope to give a brief understanding of how Scripture describes and defines apostles and whether or not there is a gift called apostleship. A great place to start is Acts 1:21–26.

To give a dash of context, after the suicide of Judas Iscariot, Peter addressed the matter of finding a replacement for Judas (Acts 1:15–20). In doing so, he laid out two requirements for who this replacement apostle should be (Acts 1:21–22), and the subsequent prayer of the people (cf. Acts 1:15) revealed a third requirement as well (1:24–25).  Acts 1:21–26 begins with the words of Peter:

“21 ‘So one of the men who have accompanied us during all the time that the Lord Jesus went in and out among us, 22 beginning from the baptism of John until the day when he was taken up from us—one of these men must become with us a witness to his resurrection.’ 23 And they put forward two, Joseph called Barsabbas, who was also called Justus, and Matthias. 24 And they prayed and said, ‘You, Lord, who know the hearts of all, show which one of these two you have chosen 25 to take the place in this ministry and apostleship from which Judas turned aside to go to his own place.’ 26 And they cast lots for them, and the lot fell on Matthias, and he was numbered with the eleven apostles.” (Acts 1:21–26)

The requirements that can be gathered are as follows:

1. The candidate was required to be someone who followed Jesus during his entire earthly ministry, beginning from Jesus’ baptism by John to Jesus’ ascension into heaven (1:21–22a).

2. The candidate was required to have seen Jesus after His resurrection (1:22b).

While the first two requirements are fairly straightforward, the third is not. Some question the wisdom of the Christians’ use of lots to decide between Justus and Matthias, but my understanding is that the Lord (i.e., the Lord Jesus; cf. Acts 1:21) providentially allowed the use of lots to appoint the replacement for Judas. The Christians were led by the eleven and prayed to the Lord Jesus that He would reveal to them the apostle He had already chosen (Acts 1:24). In this way, it could be said that, just as Jesus had personally appointed the other apostles (Mark 3:13–19), so also did He appoint Matthias through the casting of lots.

Luke’s description of Matthias’ appointment showed that the early Christians accepted this choice as the Lord’s mind on the matter: “he was numbered with the eleven apostles” (Acts 1:26). Later reference to “the twelve” assume Matthias’s legitimacy as an apostle as well (Acts 6:2).